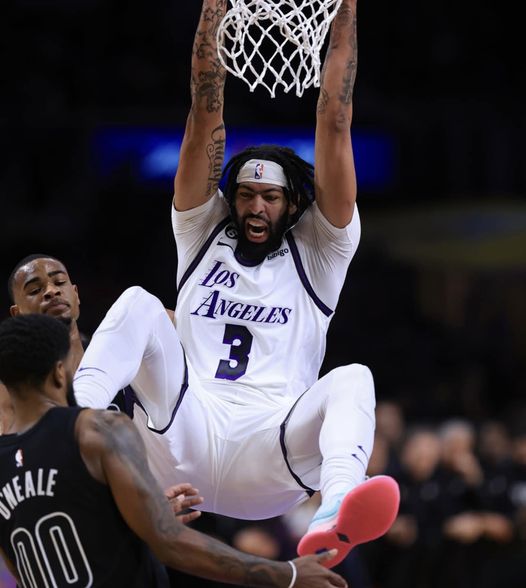 Anthony Davis stepped up for the LeBron James-less Los Angeles Lakers as they defeated the Brooklyn Nets, 116-103, Monday victory over the Brooklyn Nets Monday (Philippine time) on their home turf.

Davis erupted with season-high 37 points on top of 18 rebounds, including 10 offensive rebounds, to lead the Lakers in snapping a five-game losing skid.

“I knew I had to dominate to get this win. With LeBron (James) out, a lot of guys lean on me to get the job done,” he told the AP in a report.

The Lakers led throughout the match with a well-motivated Davis putting together his season’s best game. He was averaging only 8.6 points in the second half but exceeded that with 21 against the Nets, including 15 points in the third.

Davis shared that he was watching the Green Bay Packers game against the Dallas Cowboys when Aaron Rodgers threw a slant to Allen Lazard for 40 yards.

“He was flexing and that got me motivated,” he said.

He tried getting to the paint and scoring inside considering that the Nets were short of shot blockers, adding that if they put it on the rim he could get an offensive rebound.

LeBron James, who is recovering from a groin injury, could return to the Lakers lineup later this week after missing his second straight game due to a left adductor strain that occurred last week during their fourth-quarter game against the Clippers who demolished them, 114-101.

Coach Darvin Ham said James can rejoin the team practice for the Lakers’ next game against the Detroit Pistons.

Ham said James being out is just precautionary as they are only 12 games into the season and there are still 70 games left to be played.

He also said that they have a favorable schedule where James can sit, rest, and regain his strength for the battles ahead.

Over in Sacramento, Domantas Sabonis poured in 26 points with 22 rebounds as the Sacramento Kings toppled the Golden State Warriors, 122-115.

De’Aaron Fox hit 11 of his 22 markers in the fourth period for the Kings who started with 0-4 but won six games of their last eight outings.

King coach Mike Brown lauded Sabonis, saying that the latter was a monster in the pain and on the glass.

“You need games like that from your stars in order to get over the hump from time to time,” Brown said.

Kings’ Keegan Murray fired five triples and finished with 21 points as Kevin Huerter hit four treys to close with 17. Malik Monk, for his part, had 12 markers off the bench.

Murray said the win over the Warriors proved they can compete against any team in the league.

Curry said it’s disappointing to be 0-7 as they remained winless on the road this season.