The Barangay Ginebra Gin Kings bounced back from their Game 4 loss, beating the Bay Area Dragons, 101-91, in Game 5 of their PBA Commissioner’s Cup race-to-four finals at the Mall of Asia (MOA) Arena Sunday, January 8, that saw 21,823 spectators in attendance.

Brownlee said, “We just wanted to come out and be aggressive. We wanted to get this game so that we’d need just one more to win the series.”

Ginebra coach Tim Cone, for his part, said, “We had to keep earning it, earning it.

We just had a better feel for what we wanted to do tonight and I think we executed that for the most part.”

The Bay Area Dragons still gave the Kings a tough time despite the absence of high-scoring import Andrew Nicholson.

“We’re surprised Glen would not play, and that was a bonus for us, knowing Nicholson is out. Glen is a good point guard,” said Cone who attributed their victory to his players who gave it all in the game.

Japeth Aguilar, who joined forces with Pringle, chipped in 12 points off the bench for his second best scoring in the conference as they both helped Ginebra grab a huge lead as much as 18 points.

Pringle, still recuperating from a knee injury, erupted with six three-pointers out of nine attempts.

“This is my third surgery on this knee. At first, I didn’t really think I could get to this point, but everything’s good at this point,” he said.

Barangay Ginebra coach Tim Cone says they were ready for the Bay Area Dragons in Game 5 with a solid game plan. PBA PHOTO

Cone said Pringle is still working his way back and is currently 90 percent better than most PBA players. “He’s a natural starter, but we try to bring him off the bench so we can monitor his minutes. But that adds so much depth to our team, to be able to bring a guy like Stanley out and to relieve LA (Tenorio) or Scottie (Thompson). And we can go to him in big moments like today.”

The Dragons tried to stage a comeback late in the final period but came short as Scottie Thompson and Pringle scored back-to-back three-pointers to secure the Kings’ win.

Hayden Blankley, whom the Dragons resorted to for help, finished with 29 points while Zheng Qilong and Liu Chuanxing added 15 and 10 points, respectively,

Game 4 hero Kobey Lam was limited to 16 points as the Dragons could only trim the Kings’ lead to five, 91-86, in the final frame.

Both teams are taking a two-day break before clashing anew on Wednesday at the Smart Araneta Coliseum with the Kings shooting for their 15th PBA overall crown.

The Dragons tried to stage a comeback but came short as Scottie Thompson and Pringle scored back-to-back three-pointers to secure the Kings’ win. 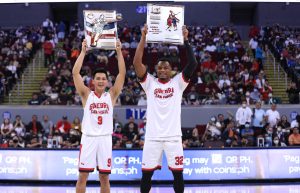