PSC’s 2023 budget hike reflected in the General Appropriations Act aims to back the national athletes seeing action in the 2022 Asian Games, 2023 Southeast Asian Games, and 2024 Summer Olympics in Paris.

Go was in attendance when President Ferdinand Marcos Jr. signed Republic Act No. 11936 or the General Appropriations Act of 2023 in a December 16 ceremony held at the Malacañang Palace.

The training of swimmers of the embattled Philippine Swimming Inc. will be subsidized as well.

The country’s hosting of the FIBA World Cup 2023 and other grassroots programs such as Batang Pinoy, the Philippine National Games, and those under the Sports Development Council will also get a share of the government funds.

Portions of the budget are also intended for the development of sports infrastructure across the country, advanced research and development in sports sciences and sports technology, and financial assistance for athletes.

Go underscored the importance of the joint efforts of the government and the sports community in maximizing available resources to improve the welfare of the country’s athletes.

He believes that the country will produce more world-class athletes when government invests in sports. It also aids the government’s campaign to keep the youth from engaging in dangerous vices like illegal drug use.

He made his intention clear during his first flag-raising ceremony as the national sports agency’s 12th chairman.

He plans to resume providing free meals for the members of the Philippine team.

He also urged the PSC employees to suggest anything that can help improve the service they provide their clients.

The PSC chief said, “I work best when I am on the ground – talking and listening to people I am supposed to serve. I would rather go to the athlete, and I also encourage our Commissioners to do the same.”

He also assured his support to the athletes while praising PSC staff as the most valuable players (MVPs) for the work that they do for the athletes.

“I want to assure everyone that I am here to be of service. Period. No personal agenda. I am here to serve our national athletes, the NSAs, and the PSC organization,” he added.

PHILIPPINES MOVES UP ONE SPOT IN FIBA 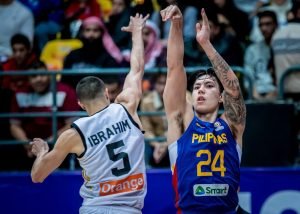