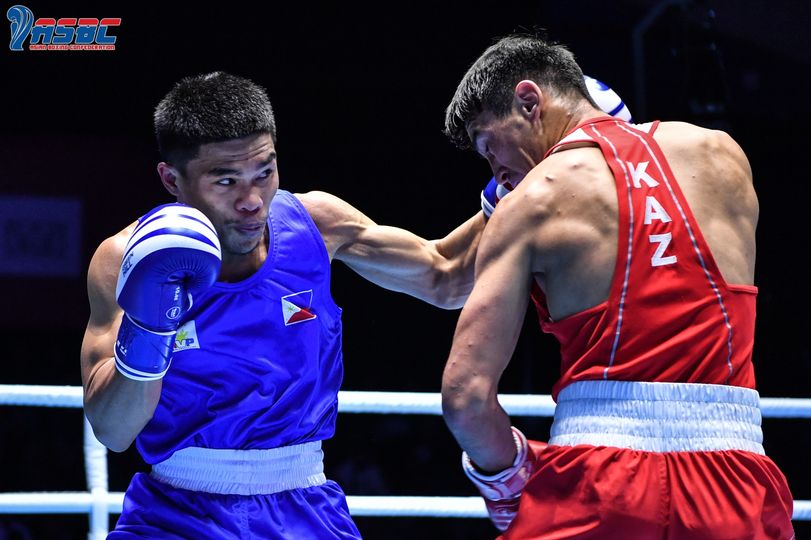 The 24-year-old Carlo Paalam, who hails from Cagayan de Oro City, mustered the last ounce of his energy to survive the heavy-hitting Sabyrkhan in the third and final round to secure the -54kg class title. The latter was a silver medalist in the 2021 World Championships held in Belgrade, Serbia.

It can be recalled that Paalam competed in the flyweight division last year at the Tokyo Olympics where he snatched the silver. The ASBC was his major first tournament after his Olympiad stint.

He arranged a title showdown with Sabyrkhan after demolishing No. 2 Sanzhai Seidakmatov of Kyrgyzstan in a 5-0 shutout win in the semifinals.

Paalam nearly lost the bout when he got too cocky following his opening round dominance as the Kazakh engaged him in a brawl. This enabled Sabyrkhan to grab the second round but the Filipino unleashed combinations to make up for his slow legwork to seal the victory.

The Filipino boxer earned the nod of three judges who identically scored the match, 29-28, and another judge also favored him (30-27), while one judge gave Sabyrkhan the win, 29-28.

He said he didn’t expect to win as he was still adjusting to his new weight, which is two kilograms heavier than his original weight.

“Unang-una di ko alam kung ano ang galaw ko, excited akong makita ano ang galaw ko. Di ko alam anong gawin sa taas ng ring. Umakyat ako ng timbang, dun nag-adjust ako. Di ko alam paano dalhin sarili ko sa taas ng ring kasi mabibigat at magagaling sila (At first, I didn’t know what my move was, I was excited to see what my move was. Not sure what to do at the top of the ring. I gained weight, I  adjusted. I don’t know how to bring myself to the top of the ring as the other boxers were heavy and good),” he said.

Losing weight was difficult, he said. He gained weight after the Tokyo Olympics so entering in the 54kg was a wise decision but he still had to reduce to make the weight.

He earlier thanked those who supported and prayed for him from the start of the tournament until bagging the gold.

He also said, “Naniniwala po ako na magpursige at tiwala lage sa sarili. At ang pinaka importante tiwala at pananampalataya sa Panginoon (I believe in persevering and trusting yourself. And the most important trust and faith in the Lord).”

Paalam also congratulated his teammates who saw action in ASBC, particularly, Nesthy Petecio and Hergie Bacyadan, for winning bronzes in the tournament.

Mabuhay ka, Carlo Paalam, sa gintong medalyang iyong napanalunan sa men’s bantamweight 54kg ng ASBC Asian Elite Men and Women Championship na ginanap sa Amman, Jordan (We pay tribute to another Filipino who raised our flag and give recognition to the ability of the Filipino athlete all over the world. Long live, Carlo Paalam, for the gold medal you won in the men’s bantamweight 54kg of the ASBC Asian Elite Men and Women Championship held in Amman, Jordan)!”