The 28-year-old Jerusalem, who hails from Manolo Fortich in Bukidnon, won by a technical knockout after unleashing a solid straight to Taniguchi’s face with only 1:04 left in the second round.

The former world champion attempted to get up but failed, which led the referee to decide that the Japanese pug was no longer fit to continue fighting.

His victory came on the heels of a string of Filipinos’ world championship losses in 2022. Mark Magsayo was the last boxing world boxing champion of the Philippines before he lost his WBC featherweight belt to Mexican Rey Vargas.

From Osaka, Japan, he arrived in the country Sunday, January 8, to a hero’s welcome. He and Sanman Promotions executive JC Mananquil boarded a connecting flight from Manila to Cebu.

“The victory is for the Philippines and my family,” he said, also thanking Zip-Sanman team.

He said, “Of course, I am thankful to my coach Michael Domingo who worked hard with me during training camp.”

The new champion will take a much-needed break but his camp is awaiting WBO’s decision about Jerusalem’s taking on a mandatory or voluntary defense.

Jerusalem said, “I will not stop training hard after this.”

In a Kyodo News report, Taniguchi said, “I don’t remember how the bout went, but I got floored clean. I was naive receiving a punch like that.”

Go is chair of the Senate Committee on Sports. 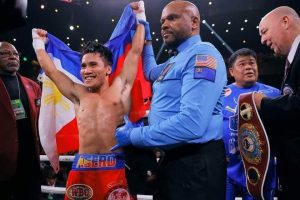 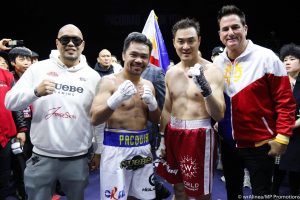 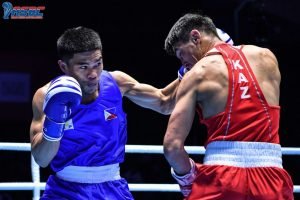