Skip to content
Home » HIDILYN DIAZ IS A WORLD CHAMPION AT LAST!

She tallied a total of 270kg, outclassing rivals Rosalba Morales of Colombia and Ana Gabriela Lopez of Mexico to sweep all three golds at stake in the snatch, clean and jerk, and total.

The 31-year-old ace lifted 93kg in the snatch to capture her first gold in the world championship and followed it up with 114 kg to top the clean and jerk.

Top seed Morales, who appeared to be suffering from a knee injury, failed her compatriots and settled for the overall silver instead with a total lift of 199kg – 89kg in snatch (third) and 110kg in clean and jerk (second) while Lopez salvaged the bronze (198kg) with a silver in the snatch, and a bronze in clean and jerk.

Morales tried to put pressure on Diaz by going for 115kg only to register back-to-back no lifts on her last two clean-and-jerk attempts.

She thanked God and Team HD for believing in her ability and guiding her. Team HD is headed by her husband Julius Naranjo who serves as her head coach and strength and conditioning coach. Joining him are sports nutritionist Jeaneth Aro, and sports psychologist Dr. Karen Trinidad.

The new world champion also thanked competition assistant @rowel.g, @ayn_7 for her yoga session, and @getjekd at Doc @goodrepsphysicaltherapy for helping her restore her strength as well as the Philippine Sports Commission, Samahang Weightlifting ng Pilipinas, SWP president Monico Puentevella, MVP Sports Foundation, Philippine Air Force, her sponsors, Fil-Am community in the USA, to Filipinos, and all her prayer warriors.

“This is my last lift at 55kgs Category and I’m happy to end it as @iwfnet World Champion. Ang tagumpay na ito ay para sa Diyos, Bayan, Sarili, Pamilya, TeamHD, at Fans (This victory is for God, country, myself, family, TeamHD, and fans),” Diaz said.

On her Instagram, she wrote, “This win is for you, Lord. Thank you for the opportunity to represent the Philippines here (at) IWF World Championship 2022 and the gold medal here.”

She said the road to Paris 2024 Olympics may be a tough one but she vowed to do everything she can to make it happen.

Her world championship feat is the missing piece to her gold medal collection having swept the golds in the Tokyo Olympics in 2021, Asian Games, and the Southeast Asian Games.

Diaz has been chasing the elusive world championship gold since winning bronzes in the women’s 53kg division in 2017 and 2015 and the 55kg class in 2019. She, however, skipped the weightlifting world in Tashkent last year, a few months after her historic Olympic gold triumph.

Her husband-coach Julius Naranjo also took to his social media accounts and wrote, “It’s official! We’ve kicked off our Paris 2024 Journey with a decent start and ended our year with 3 Gold medals in the Snatch/CJ/Total, going 93/114/207. Not our best showing but a historical one being the First Filipina to win a World Championships.”

“It’s been definitely a journey coming back, Hidilyn Diaz and I have accomplished a lot in 2022. From winning the Philippines’ first ever Olympics (gold] to getting married, and to winning our 2nd Southeast Asian Games Gold Medal,” Naranjo, who wed Diaz in July this year on the first anniversary of her Olympic gold win, said. 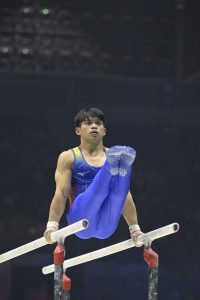