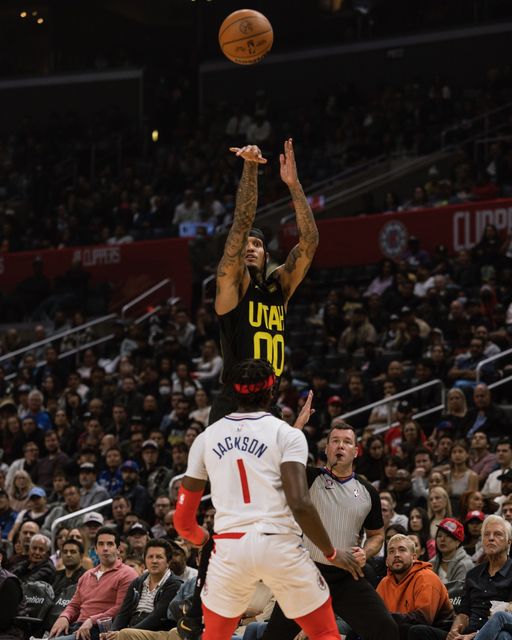 Filipino-American Jordan Clarkson poured in 23 points and reserve Collin Sexton had 22 to lead the Utah Jazz’s 110-102 demolition of the Los Angeles (LA) Clippers on Sunday night (Monday in the Philippines).

The Jazz rallied past the Clippers after blowing a 10-point lead in the first half and trailing in the second half.

“Finding ways to win is fun. I’m very proud of the team to overcome 20 turnovers.”

Clarkson’s triple early in the fourth tied the game at 87-all.

Paul George canned 34 markers, his third time in four games to score over 30, while Marcus Morris chipped in 18 for the Clippers.

Los Angeles had its three-game winning streak snapped. Marcus Morris added 18 points for the Clippers who missed Kawhi Leonard anew as he was still dealing with knee stiffness.

Nicolas Batum said they got to stick together and that they’ll be OK.

The Clippers missed all 11 of their triple attempts in the fourth period. George also missed crucial shots down the stretch when Utah erased a four-point deficit to pull away.

Hardy lauded Lauri Markkanen for doing a good job in making Paul George work hard. He also just did not make shots but also get the ball.

“Not all 11 (3-pointers) were guarded perfectly. There were just some that were missed,” he said.

Utah hit nine points in a row, highlighted by Malik Beasley’s try to take the lead for good only 5:30 left in the game. It was part of a 14-2 run that stretched the Jazz’s lead to 106-98, with Sexton drilling in seven points.

Sexton said he’s started to get more comfortable in himself, saying, “Just staying ready and being present throughout the game.”

He also said that they battled the entire match and never get down when George made a tough shot.

Sexton fed Markkanen to close out with an inside basket. Markkanen, playing his first season in Utah, accounted for 18 points and nine rebounds along with Jordan Clarkson scoring effort.

Meanwhile, Clippers coach Tyronn Lue said there is no timetable for Leonard’s return. The latter only played in two games since the season started on October 20. He averages 12.5 points, 6.5 rebounds, and two assists. He missed the entire season last year while undergoing rehab from surgery for a right knee partially torn ACL.

Lue said, “We knew coming off an ACL it wasn’t going to be a straight line. We talked about it before the season. The biggest thing is he’s progressing well. We’re just going to follow the lead of our medical staff. We got to be smart about the situation.”

Leonard, who’s been working out on his own, didn’t join the Clippers’ two-game trip to Texas.

“He’s progressing and he’s getting better, so that’s the most important thing. There’s really not a timeframe of when he’s going to be back,” Lue added.